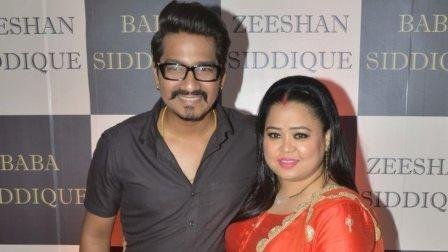 Bharti Singh is a versatile & Bubbly Television Celebrity. known as a Queen of Comedy in Indian Television, She is also popular in Punjabi Film & TV Industry.

Bharti Singh born on 03 July 1986in Amritsar Punjab, her father was Nepalese and her Mother was Punjabi. Due to tragedy, She lost her father in her childhood, and her mother raised her and her siblings, Pinky Singh & Dheeraj Singh, She married writer Harsh Limbachaya in Oct 2017

Bharti Singh Married Writer Harsh Limbachaya in a Private ceremony in 2017, Harsh is a TV Scriptwriter worked for Comedy Circus & Comedy Nights series, Also he was a Writer and Producer of Khatra Khatra Khatra, Hum Tum & Quarantine, and Funhit Me Jari Show.

Bharti Singh completed her MA in History & won a National level Gold medal in Pistol Shooting, But due to financial issues, she decided to quit sports career and do a career to earn and support her family.

She also hosted the Show Comedy Nights Bachao in year 2015

She also acted in a few Punjabi and Kannada Movies. She also done Her Bollywood movie debuite from Movie Khiladi 786 in year 2012 & Sanam Ray movie in 2016.

She recently appeared in a dance reality show “Sony’s India’s Best dancers” with her Husband Harsh Limbachaya in the year 2020 and she is associated with The Kapil Sharma Show Season 2 from the year 2018 and Show Funhit me Jari from the Year 2020.

Bharti Singh is one of the Weight loss Icon in Hindi Entertainment Industry, because she worked very hard to lower her weight from a whooping 90 kg to 82 kg and reducing.

She doesn’t believe in an Extensive Gym or Strict Diet, but she follows the Regular Gym Exercise at least 20 minutes of Cardio & Cycling. Her Regular exercise helps her health to handle a hectic shooting schedule.

She revealed a secret of her weight loss can be a Green tea and Coffee full of Antioxidants which prefers drinking all day after every meal.

She prefers to stick with her Punjabi diet a full meal in the Great Punjabi Cuisine. But sometimes she feels that her shoot time and meal time defers and may harm her health sometimes.

Instead of Healthy salad, she prefers eating Maggie, Bread & Omelet, and Homemade food including Dal with White Butter which shows her love to Punjabi Food.

While talking about Skincare Bharti Singh tells that she uses Good Brand Moisturizes to treat her skin, also she prefers homemade beauty products to care for her skin in natural ways.

Bharti is a TV Personality who being liked by Fans for her Mischievous and comic acting skills make her fully entertain with Hardcore Laugh. Bharti’s career graph from a Common Person to a Successful Comedian shows us that if a Person works on polishing his talent, then he definitely achieve success in life.